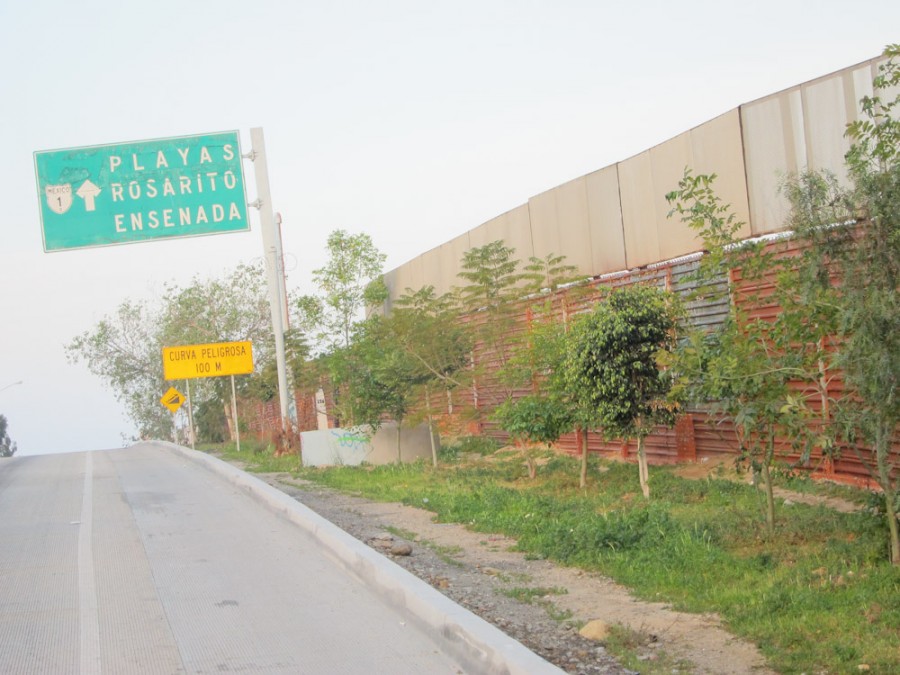 (Tijuana side of the border fence)

This photo of the very shaky border fence separating the U.S. and Mexico is located 3 miles from the southwestern edge of the continental U.S., where the fence begins in the Pacific Ocean.  Up until 1993, this fence was entirely constructed of surplus military airplane landing mats (this is the lower red metal portion of the fence, plates that were originally placed on Pacific atolls as runways during WW II). With over 1 million-plus people annually, mostly Mexicans but many from Central and South America, streaming over this 6 ft. tall barrier, and of course around it since the fence ends 15 miles inland, the U.S. Government in its wisdom decided to add a second level of steel  mesh welded to the runway plating.

Since 2006, the U.S. completed 2 additional fences behind the original fence, one of concrete  pillars and one of steel –topped barbwire making a public showcase on a Berlin-wall scale at how well the U.S. government is able to control “illegal crossings” … but of course only running these fences to the same 14 mile distance from the Pacific Ocean as the original fence. Unfortunately there are over 2,000 miles of border separating our two countries, through mostly open territory marked with occasional strands of barbed wire.  The U.S. government uses a measure of the number of apprehensions of illegals crossing the border as their barometer of success for this fence at stopping illegal traffic.  Their theory is if there are fewer people being caught, then there are less people crossing. In other words, the fewer we capture, the more successful we are at stopping them.  Of course, if you look at the faces of the  people who are now waiting tables, doing our laundry, cleaning the hotel rooms, mowing our lawns, and working construction, from El Paso  to Anchorage, Alaska then you might conclude otherwise about the viability of our 4 miles of fencing.

Whether the border is a blight or a fantasy of those in Washington, we can still share such moments as a Baja California sunrise over the mountains. 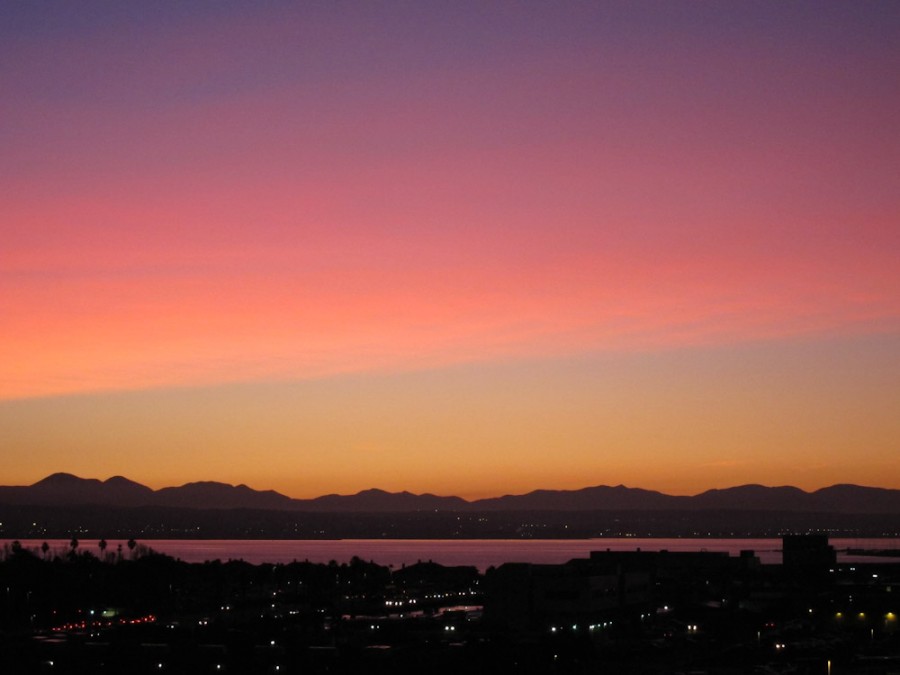 and as it reaches out over the (real) Coronado Islands just offshore of Tijuana. Mexico at sunset: 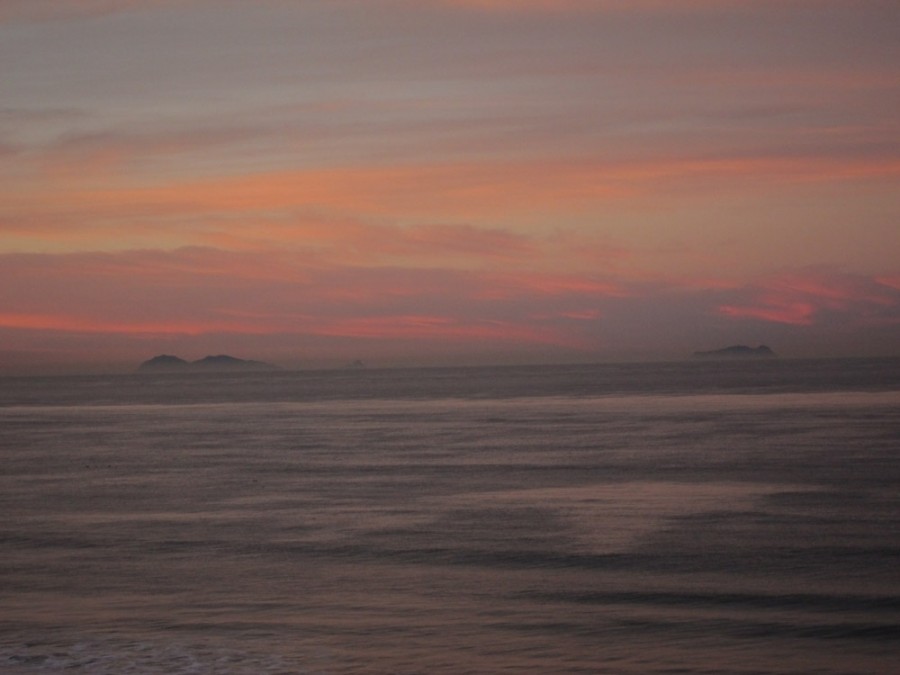 To understand the present boundary separating these two not-always very friendly nations, and how this line across the sand impacts Seagate’s operations, we must first look back in history.  In 1803 the great migration of settlers in the new United States was aided by President Jefferson’s acquisition of the “Louisiana Territories” for approx. $15 million, some of which was still claimed by Spain, effectively doubling the size of the U.S. at the time, and unfortunately extending slavery law into that region. The great migration westward was only fueled by this acquisition.  The spirit of “Manifest Destiny”, that it was the duty of the democratic government and white European settlers to occupy and rule all the lands to the west of the Mississippi to the Pacific Ocean, had taken on life … and taken over quite a few lives.

At the same time the U.S. was working its way west, soon after Mexico’s new independence from Spain (which it declared in 1810 but was finally recognized as a nation in 1821) the new country of Mexico invited settlers into the sparsely-populated region that would later become the State of Texas. All that was required was taking an oath of allegiance to Mexico and converting to Catholicism. The settlers turned out to be a roudy bunch that did not enjoy being governed from a distance Mexico City.  In 1835 the “ Texicans” revolted, captured Santa Ana and forced him to sign the Treaty of Velasco in 1836 establishing the Republic of Texas.

With border fighting still continuing with Mexico through 1845, the Texans voted to join the U.S. as the 28th State and was approved by Congress that same year. Unfortunately (as it turned out for Mexico), the continuing border dispute over a region stretching north of the Rio Grande River deteriorated into war by 1846, known as the Mexican American War. The U.S. quickly repelled the Mexican army and made a three-pronged attack into Mexico. One U.S. army headed west cutting off the lands that would become New Mexico and Arizona, and ultimately into southern California. A second U.S. army led by (soon-to-be President) Zachary Taylor attacked south into Northern Mexico, through Monterey, Mexico and headed towards Mexico City by land. At the same time, a third small U.S. Army made an amphibious landing in the Mexican port of Veracruz and marched west and entered and took over Mexico City.  By 1848, the Mexican Government was forced to sign and ratify the “Treaty Of Guadeloupe Hidalgo”, ceding the territories of  Arizona, (upper) California, Nevada, Utah and the western portions of Colorado, Wyoming, and New Mexico to the U.S. for $15 million … and of course the departure of the U.S. army from Mexico City and what land remained of northern Mexico. By this treaty and the failed Mexican-American War, Mexico effectively lost 55% of the remainder of its territory (not counting Texas which it had lost previously).

Okay, if you are still following this history lesson, then we get to the who was here first and who took land from whom.  While it may appear that the U.S. had taken a big chunk of Mexico, keep in mind that there was no such place as Mexico until 1821 after their War of Independence from Spain.  All of these northern territories were actually areas conquered over 300 years by the Spanish Empire which had taken “ownership” from the indigenous Native American people (a.k.a. our Indians) during their  “discovery” of the new world.  Most of the Native American tribes did not have any concept that land could have any ownership at the time.  The Spaniards established their empire and ownership by force, making the Native populations subservient, with the exceptions of remote tribes such as the Apaches and Comanches.

So returning to this fragile metal fence that was erected in order to keep the hordes of “third world” from overrunning the U.S., we come to the paradox which has allowed Seagate to become established.  Rather than keeping the 3rd world from coming north, the border has become a very effective barrier to keep the U.S. from expanding south.  It has kept the region of Baja California relatively free of advancing subdivisions, malls, and waterfront houses turning this region into an overdeveloped urban sprawl.  This is how we can maintain Seagate’s olive trees and farming operations in this picturesque unspoiled corner of the world: 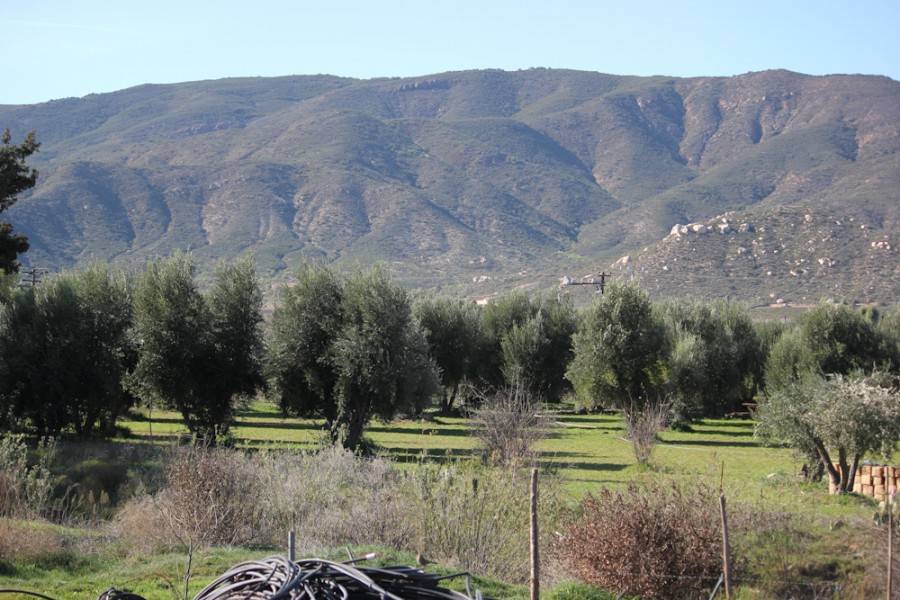 Few U.S. companies have the experience or capabilities to establish any operations in this region.  The barriers to entry and the risks and political uncertainties are too high. To our knowledge, there are no other U.S. health food companies operating farms and factories in this region.  Baja California is a region rich in natural resources, that thanks to that thin metal wall dividing two countries, will stay mostly pristine and wild for many more generations.