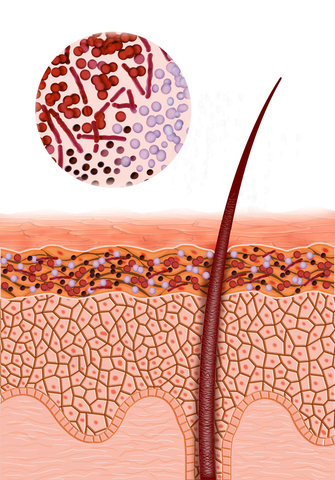 About half of fungi are harmful to the human body, so you have a 50/50 chance of being okay in their presence. When you think about it, those odds aren’t exactly comforting. Feel free to blame fungi if you’ve ever had athlete’s foot, a yeast infection, or a toenail infection. Since fungus is inherently organic and a type of primitive vegetable, various forms can live in the air, water, soil, plants, and inside the human body. Many types of fungi spread through spores in the air, which can be inhaled or land on your skin. If you’re immune system is already weak or if you take antibiotics, you’re at a higher risk of contracting a fungal infection through the lungs or skin.

The fifty percent of peaceful fungi that live harmoniously in our bodies tends to go unnoticed, at least until it causes opportunistic infections in people already struggling with disease. Immunity disorders like HIV/AIDS and treatments like chemotherapy make the human body particularly susceptible to infection. However, perfectly healthy people are affected by fungi too. Gardeners are at risk of fungal infections because many types of fungi live in the ground. Residents of the Southwestern United States are at risk of a fungi infection, cocci, which isn’t found in other regions of the world. Fungi thrive on the feet, hands, ears, and groins of humans, and studies have shown that over 100 species of fungi live on the average human foot.

Skin infections are most commonly caused by fungi, because they thrive on the keratin protein found in our outer layer of skin, hair, and nails. The most common type of skin fungi are dermatophytes and Candida, which causes ringworm infections, yeast infections, and jock itch. Common nail fungus, known as onychomycosis, is caused by infection spread from athlete’s foot or excessive foot sweat from wearing socks and shoes. Infants and toddlers often suffer from oral thrush, or a fungal infection of the mouth, causing lesions, bleeding, pain, and loss of the sense of taste.

But fungi doesn’t just affect human skin, it can also affect our membranes and bloodstream. Fungal meningitis is a life-threatening infection that causes inflammation of the membranes that cover the brain and spinal cord. Aspergilla’s is a type of airborne mold that causes serious pulmonary and bloodstream infections in the human body, especially in cancer, HIV, and bone marrow transplant patients.

Although fungi can be hard to get rid of, you can often treat minor infections without complex prescription medications. Topical treatments that include aloe vera, garlic, honey, and tea tree oil have also proven effective in relieving the symptoms of minor fungal infections. To give your body the best fighting chance, look for all-natural ingredients, such as natural coconut oil, olive oil, olive leaf extract and Vitamin E. However, the best way to prevent fungal infections is to build your immune system with a healthy diet and exercise. By supplementing your daily diet with Vitamins A, C, and E, you can give your immune system the extra boost it needs to fight fungus before it strikes.

1 thought on “Fifty Percent of Fungi to Fight”