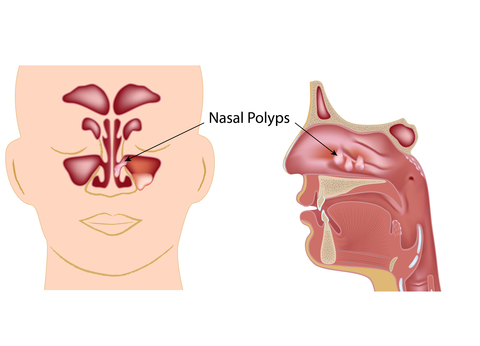 Nasal and sinus problems can be the result of many different causes including, allergies, bacterial infection, viral infection, fungal infection, and the physical blockage of the sinuses caused by inflammation, polyps, and the sealing of the sinus passages by bone growth.

When there is a sinus irritation, the body will cause its sinus membranes to become inflamed and the polyps, which live in the air canals of the nose, to swell. This is the first line of defense by the body trying to stop the flow of air through the nasal passages in order to cut off the outside cause of the irritation or infection.  However, when this swelling is extreme it not only cuts off the flow of air into the nasal cavities, but it also cuts off the outward drainage of mucous from the sinuses.  Normally mucous acts as a lubricant to the nasal and sinus membranes. However, when it is not allowed to drain, it can harbor bacteria and eventually lead to secondary infection.

A study of the mucous membranes of 233 patients, found over 619 different strains of fungi in both healthy persons and also patients suffering from chronic rhinosinusitus. The  most prevalent strains were Penicillium, Aspergillus, Cladosporium, Alternaria and Aureobasidium. These fungal spores were transmitted in the air. Sources of high concentrations of airborne fungi include:

– Homes where there was flooding or water damage. Dead air spaces such as the walls and ceiling, when no remedial action is taken after a leak, will grow fungi which if undetected can lead to life-threatening infections.

– Living in moist climates such as the southeastern U.S. (States such as Florida, Mississippi, Louisiana) were the humidity is very high during the summers is a breeding ground for fungi which eventually get into homes.

– Living in very dry desert climates (such as Arizona, New Mexico, and Nevada) surprisingly can have an even high fungal airborne concentration that the wet climates. Fungi inhabit the dry desert sands and dirt. They serve an important purpose in Nature to consume dead plant and animal tissue and break them back down and convert them into dirt.  However, the strong desert winds lift this dirt into the air along with the fungal spores and cause fungal infections in people living in these regions.  It is ironic that many people that moved to places like Las Vegas to escape the the pollen and hay fever back East, end up with an even worse problem, fungal infections in their sinuses.

-First of all you should (if possible) move away from the source of fungus, whether it is a home that had water damage that was not properly repaired or a home in the desert or in the Southeast where the land around you never seems to ever dry out.  If you are unable to move, consider getting several high-capacity hepa filters and place them around the house. This will help to reduce but not eliminate the levels of fungal spores int he air. No matter where you live, there will be some fungi in the air. However it is when the concentrations get so high that they overwhelm the immune system and cause infection, that this becomes a problem

-Step 2 is to try and drain and flush out the sinuses to get rid of the embedded fungal spores and open up the airways. This will to help prevent secondary bacterial infections that develop from sinus blockage.  Since most people cannot physically move either from their water-damaged house or from their region of the U.S. due to jobs, family, and finances, it is typical that people with sinus infections caused by mold and other forms of fungi will fight it with over-the-counter remedies. Of course even were they successful, it would only be temporary because they are still living in the same high concentration fungal zone that caused the problem, and which will continue to be a source of fungal spores.  Several good ways to flush the sinuses include using neti pots, saltwater sprays, and homeopathic remedies designed to reduce nasal and sinus irritations such as Olive Leaf Nasal Spray.