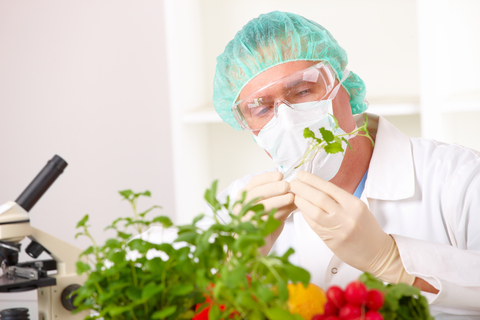 GMO might only be three letters, but it’s become the latest dirty word in many people’s vocabulary. GMOs, or genetically modified organisms, have infiltrated much of the food supply in the United States and they’re harder to avoid than you’d think. Genetic engineering has become standard practice on many agricultural farms, meaning that the foods you eat could contain more than you bargained for. Geneticists have become incredibly skilled at taking genes from one plant or animal and inserting them into another species to make the modified organism grow faster, larger, or in areas that it otherwise wouldn’t thrive. As you walk down the aisles of your local supermarket, you should be aware of what products most commonly contain GMOs and how to tell the difference.

In the United States, over sixty GMO foods have been approved for human consumption. Soybeans are the most common food to be genetically modified, and the Center for Food Safety reported at least 91% of soybeans in the country have been altered from their natural state. Not only is this troubling for people who eat processed and packaged foods, but also for vegetarians who rely upon soy to supplement their meatless diets with natural protein. The Center also reported that about 85% of the corn grown in the United States is genetically modified. Not only is corn is the largest crop grown in the country, but it also shows up in all sorts of recipes that contain corn starch, corn meal, and corn syrup.

Tomatoes, radicchio, squash, and zucchini have been approved for genetic modifications in the U.S. Genetically-altered pigs and salmon have also been making an appearance in local supermarkets. Although food manufacturers aren’t required to label foods that have been genetically modified, they also aren’t allowed to label foods “100% organic” if they were modified in any way or fed with genetically modified feed. Therefore, the safest way to know what is in the foods you eat is to stick to the “100% organic” labels, even when the price tag is a couple dollars higher. Contrary to popular belief, a “USDA Organic Certified” label isn’t the gold standard. Trusted organic certification institutions like Oregon Tilth, California Certified Organic Farmers, and Quality Assurance International, have higher and more rigorous standards for what’s environmentally sustainable.

At Seagate, we’re in charge of our own farm and we refuse to let anyone insert oddball genes where they don’t belong. By operating our own farm and harvesting our own crops that are free of chemicals, pesticides, and GMOs, we can guarantee supplements that are designed the way nature intended them to be. If you can’t grow your own food in a backyard garden, it’s at least comforting to know what you’re spending your money on. To learn more about GMOs that might be lurking in your favorite brands, check out this Non-GMO Shopping Guide before you visit the store this week.