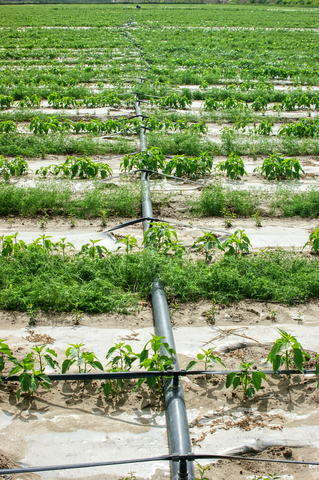 Farming in the desert might seem impossible and impractical if you aren’t entirely familiar with your agricultural history. Modern desert farming almost entirely relies on irrigation strategies, and there are a few different types of irrigation that have proven successful in arid climates. However, Native Americans in the Sonoran Desert have historically found ways to grow crops naturally, without the use of any irrigation at all. These cultures solely relied upon the winter snows, summer monsoon rains, tropical air patterns, and religious ceremonies to produce yields to feed their families.

It’s always been difficult to grow traditional plants in the desert because of ground water depletion. Drip irrigation is one of the best ways to combat this depletion, as shown by successful operations in California’s Imperial Valley, Israel, Australia, and the Horn of Africa. Drip irrigation, also known as trickle, micro, or localized irrigation, preserves both water and fertilizer by letting water slowly drip down to the plants’ roots. In this method, narrow tubes are inserted to deliver water to a plant’s base, either onto the surface of the soil or directly into the root area. The first practical drip irrigation emitters were perfected in the 1960s, and many farmers claimed that they were the best invention since the 1930s-style impact sprinkler.

However, drip irrigation isn’t the only way to bring water to the desert. There’s flood irrigation, essentially pouring water on crops, but this is wasteful and breaks up the soil. And there’s also sprinkler irrigation, which certainly isn’t the most efficient use of sparse water resources either. Desert crop irrigation gets even trickier if you’re running an organic farm.  An organic farmer in Oregon named Michael Paine recently made headlines for his fully-functional solar-powered irrigation system that will save an estimated 200,000 gallons of water in five years. To read more recommendations for using drip irrigation in your organic vegetable farm, check out the University of Florida’s well-researched agricultural best practices study.

6 thoughts on “Friday Farm Fact: Irrigating in a Desert”