For people around the world, summertime is synonymous with sunburns. And although you probably don’t run to the doctor every time your skin turns red, sunburns are a serious matter that can’t be ignored. Despite common knowledge that sunburns can lead to skin cancer, the Centers for Disease Control reported that over one-third of adults and 70% of children got sunburned last year.

Even people who don’t like trying home remedies or prefer all-natural treatments are familiar with aloe vera. Almost all over-the-counter sunburn treatments that you find in your pharmacy have an aloe vera base, and it doesn’t take a botany degree to figure out how to cut open an actual aloe plant either. You can sometimes moisturize burns better with a an aloe cream than an aloe gel. But believe it or not, aloe isn’t the only sunburn treatment that is made by nature.

If you have a carton of milk in the refrigerator, pull it out when you come home with a sunburn. Try soaking a cloth in a bowl of water with milk, water, and ice cubes. Then hold the cloth on the burned area for several minutes, repeating the process several times a day. Milk contains fat, protein, and a pH that can soothe inflamed skin and reduce swelling. Similarly, the yogurt in your refrigerator may also be able to offer you some sunburn relief. Try smearing yogurt on the affected area to cool your skin, balance the pH, and promote healing. Full-fat, plain, unsweetened yogurt works best since it doesn’t contain as many artificial additives. If you’re feeling especially crafty, you can mix a paste of equal proportions yogurt, barley, and turmeric to speed up the healing process.

As if tea wasn’t already good enough for you, a pot of strong tea can also help soothe your sunburn. After you’ve made your pot of tea, use a cloth to soak it up and apply to the burnt area. Some people find that the tannins in tea help to draw out the burn and speed along healing. If you have some extra tea bags to spare or have all-over burns, you can intensify the process by soaking in a bathtub full of tea! 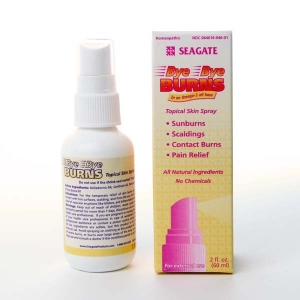 There are also oil-based topical sprays and creams that have been shown to give temporary relief of vesicular eruptions like blisters and inflammation. Seagate’s Bye Bye Burns, for example, combines natural homeopathic ingredients like Belladonna and Cantharis with a base of omega-3 shark liver oil, coconut oil, olive oil, and vitamin E. Although you should obviously avoid getting burned in the first place, stock up on some easy home remedies in case you leave your common sense at home when you head to the beach.

5 thoughts on “Natural Sunburn Treatments to Protect Your Skin”