Comments:  I am hesitant to purchase products from a company that uses shark oil/liver oil upsetting the balance of nature. What say Seagate? Thank you,  Joyce F.

This type of question regarding any use of shark-related raw material by Seagate is received by us a couple of times each year, though this is the first time anyone has suggested that we are upsetting the balance of Nature. Below is Seagate’s response to Joyce’s question-

Sorry, this is the first time in our 33 year history that anyone accused us of “upsetting the balance of nature”. So let me see if I can dispel that thought and have you consider some other interesting possibilities that may apply to this problem.

First of all, shark liver oil is a very important raw material, that has applications in joint pain control, reduction in the incidence of heart disease, cholesterol, and topically to reduce skin rashes and make the skin softer and smoother. We have never been able to find a better alternative that can do these jobs as well.

With that said, you should note that we process and use (only) approx 55 gallons of shark liver oil per year, which are derived from ~300 livers — a very very small amount of sharks and of liver oil. These livers are a byproduct of the sharks caught for food by local fishermen fishing out of “pangas” which are open boats with outboard engines, with the fishermen using hand-lines to fish. Were these fishermen not to save these livers on ice for us to process, they would have been all thrown overboard.

The fishery for sharks in our region of northern Baja California, Mexico has existed at the same level for the same species of sharks since World War II, when it was discovered that shark livers were an important source of Vitamins A and D. At the time, this was the only reliable supply of Vitamin A. The development of synthetic vitamin A during the war, reduced the dependency of shark livers. However, this fishery continues to be small but very healthy in this region as a source of food for the local fish markets in Baja California. The principle species used (95% of of the sharks captured) is the Blue Shark (Prionace glauca). This species has a strong local population that is healthy, not endangered nor even threatened. In fact there are no threatened or endangered species of sharks in our area or even in Mexico. We are regulated by the Mexican Dept. of Fisheries, the U.S. Fish and Wildlife Service, and we are in a region that happens to be signatory to the “CITES” treaty — the Convention in International Trade on Endangered Species.

As a fishing company, we happen to be by definition involved in the harvest and production of renewable natural resources. We expect that with proper management and responsibility, that we will be able to return year after year and still harvest our sardines, seaweed, and even sharks, though we gave up on shark fishing over 15 years ago because of issues of contamination. Contrast this to the petroleum industry, which is consuming a resource that is non-renewable, is steadily being consumed, and will eventually disappear. So I would be very comfortable rebutting your statement that we are “upsetting the balance of nature”.

However, there is no doubt that this balance of nature that you refer to, no longer exists. But this was not caused by the 300 blue shark livers being processed annually by Seagate. It is caused my humans dumping their wastes down their toilets, drains and sewers that eventually end up in the oceans. The reason that we discontinued shark fishing was not due to a declining resource, but to the increasing toxicity of  species like shark that occupy the highest level of the marine food chain. It takes us months of processing the shark liver oil to remove the heavy metals, dioxins, pcb’s, etc. some of the 160 toxic chemicals accumulating in sharks, such that these chemicals are no longer detectable, meaning that they are below 1 part per trillion, below the detectable levels by independent laboratory analysis. We can do this with the oil. But are unable to do this with shark meat.

So if you are really concerned about “upsetting the balance of nature”, consider what you are doing that may be affecting the oceans and the sharks that you are very concerned about —
– Your phone area code “845” indicates that you are located along the Hudson Valley, north of New York City. Consider that every time you flush your toilet, your local sewage treatment plant may filter out the larger solids and sediments, and aerate the water, but all of the other chemicals go right into the Hudson River and into the Atlantic Ocean.
– When you spray your lawn with chemicals and pesticides, each rainfall washes these chemicals down your storm sewer and directly into the Hudson, with absolutely no treatment.
– Every time you turn on a light bulb in your home or your furnace to warm your home, or your car’s engine to take you shopping, you are burning (non-renewable) hydrocarbons that are increasing the level of carbon dioxide and other greenhouse gases in the atmosphere which are slowly and steadily increasing the temperature of the Earth and its oceans. Remember that effect when another hurricane like Sandy knocks out your power again for a couple of weeks and washes away parts of Staten Island. The power plants and power lines transmitting the energy to your home are also a healthy source of pcb’s.
– Every time you use a piece of paper or flush some it down the toilet, consider all the dioxins that were emitted in Washington State and Oregon to produce that paper.
– Most of the clothing being produced is no longer made from cotton, it is made from petrochemicals … the next time you put on a shirt made from polyester, orlon, dacron, rayon .. or any of the other “…ons”  … and likely made in factories in India and China that are belching out black smoke that is poisoning their cities and our world caused by their coal-fired electric plants.
– The email that you just transmitted to us on your computer, was powered by your local electric company burning hydrocarbons and emitting carbon dioxide.

Anyway, I can go on and on about this subject for a very long time. The point that I hope I have made is that this minor by-catch of 300 shark livers from a healthy renewable natural resource that happens to provide many important benefits for many of our customers …. is not upsetting the balance of nature. Thank you for taking the time to write. Sorry for the long answer to your short question. I hope that I answered it to your satisfaction and also get you thinking about how ironic that it may be that you are in fact affecting the balance and causing pollution in our oceans rather than Seagate and our 300 shark livers.

Below is a photo of a Queen Angelfish for you that I photographed in Bonaire several years ago, where the waters appear clear. But it is what we are unable to see that may be in the composition of the water that concerns me. Regards, Richard 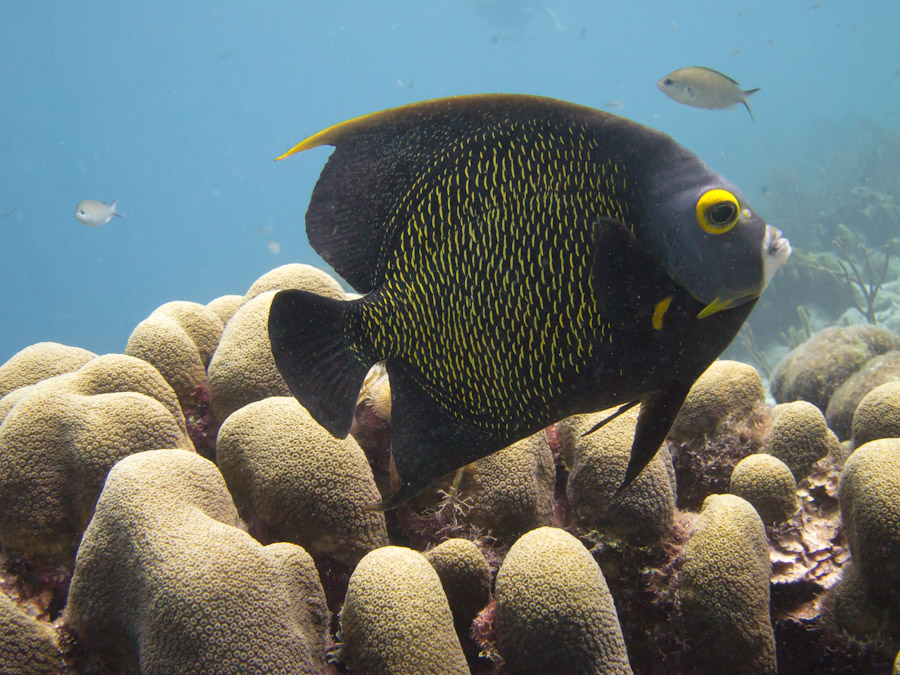