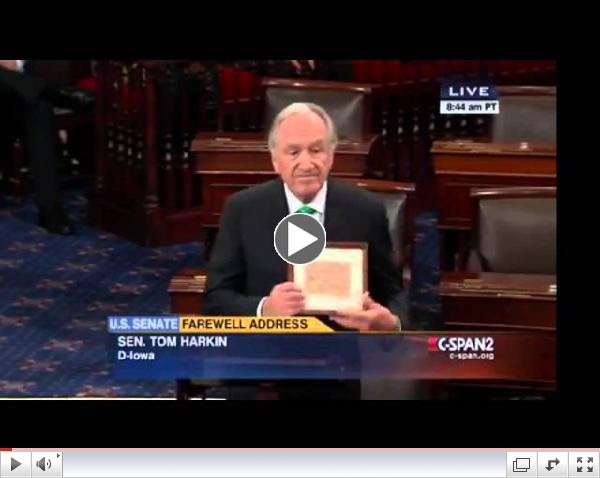 Sen. Harkin has been one of the two principal advocates of the U.S. health food industry along with Sen. Orin Hatch of Utah.  It is with mixed feelings that we have learned about the retirement of Senator Harkins (D-IL), after serving 30 years as Senator and before that 10 years in the House of Representatives.

While Senator Harkin’s accomplishments are too many to list here, some of his more significant ones include:

Three years ago the FDA made an attempt to circumvent the DSHEA, which is really the only law protecting the supplement industry. By creating a series of new harsh regulations, the FDA would have made it mandatory for every existing supplement on the market to get new approvals from the FDA similar to what is required of Pfizer and Merck for new drug approvals.  Such regulations would have wiped out the health food industry.  Senators Harkin and Hatch contacted FDA Commissioner Margaret Hamburg to let her know that the FDA does not write new laws, that it is the job of the Congress and that any attempt to rewrite DSHEA was to be immediately halted.

Shortly after announcing Sen. Harkin’s retirement, Senators Orrin Hatch (R-UT) and Tom Harkin (D-IA) recognized Sen. Martin Heinrich (D-NM) as the next Democratic leader in the U.S. Senate for safeguarding American’s access to dietary supplements … and so the fight goes on.

Sometimes the camera settings are perfect.  This photo of a mixture of corals was taken at a 40 ft. depth. You can see the underside of the surface waves in the top left corner of the picture.  It is always a strange irony to me to continue to find a kaleidoscope of colors below the surface of the ocean, where there is very little light penetration and few eyes to see and appreciate Nature’s beauty.