Conventional diaper rash treatments may be greasy, messy, and difficult to apply. Some contain chemicals that can be harmful to the infant if absorbed through the skin or inadvertently touched and swallowed.  It is not hard to imagine that is what happened in the photo above.  Almost all conventional diaper rash products must be applied by hand, which can and will further irritate the sensitive affected skin areas at the moment of application.

Have you ever taken a close look at the ingredients in the diaper rash remedy you are applying to your baby (or grandchildren)? Most diaper rash remedies are built around the principle ingredient zinc oxide.  Zinc oxide can be natually-occurring as a mineral. However, most of the zinc oxide on the market is synthetic (more info see Wikipedia article). Some of the more notable brands also use the zinc oxide in combination with other ingredients such as Castor Oil, Mineral Oil, Paraffin, Peruvian Balsam, and Petrolatum (also known as petroleum jelly or vaseline).  Petroleum Jelly was discovered in the 1850’s when a chemist Robert Chesebrough started the process of distilling and cleaning the thick gel found on oil wells (see The Truth About Petrolatum). Paraffin is usually known for candle-making, or as a solvent … but is also known as a jet fuel by its other name – kerosine.

The point of all of this is whether you wish to be putting petroleum-base compounds on the baby’s skin? Secondly, would you feel comfortable having those chemicals absorbed into the skin? Third, what if the baby inadvertently swiped its fingers into the cream before you sealed the diaper and put its fingers in its mouth? Would you be comfortable with your baby ingesting or absorbing those chemicals?

There are natural alternatives. What if you could actually apply food ingredients that would protect and nourish the skin, rather than petroleum-based products? As an example, Seagate’s Bye Bye Diaper Rash or Stop Rash use natural coconut oil, omega-3 fish liver oil, extra virgin olive oil and natural vitamin E as its main ingredients. There are no chemicals or dangers to the baby for swallowing or absorbing this rash remedy. In addition, this product comes in a spray bottle, eliminating further irritation of the baby’s skin by not having to rub a coarse zinc oxide-based cream onto a rash. 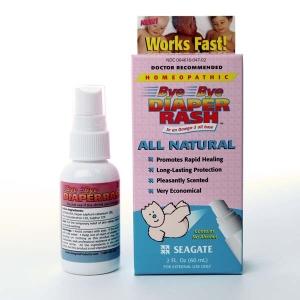 There are several ladies in our office who have had babies while working at Seagate (in the hospital, not the office), who used this diaper rash spray on their children with each diaper change, and reported that their babies never once had a diaper rash.

The picture below is my dive buddy Michelle sitting on top of a wreck at 100 feet depth off of Bonaire. In the dive community, there are “wrecks” that were purposely sunk to make artificial habitats and dive attractions. The Helma Hooker however, is a legitimate wreck that hit a reef at night, sunk and overturned on the way down. Michelle is actually sitting near the center-line of the overturned hull.  You can see a small colony of tube coral behind her just starting to grow on the hull. The story of this wreck is that it was running drugs up from South America without lights trying to avoid interception by local Dutch authorities, when it make an unexpected collision with a very sharp reef and sunk. The ship was emptied of all cargo before Michelle’s visit.