On August 24, Seagate posted a blog article regarding the new Monsanto herbicide-resistent genetically modified (GMO) soybean seed called Xtend.  It is able to make soy resist dying from being sprayed with the weed-killer Dicamba.  A number of (very angry) farmers, we call the middle-America 4-H club GMO folks, took issue with the article. We thought you would like to see a summary of the reasons that they stated on our FB page that they use GMO seeds and spray their crops with poisons to control their weeds.

The photo of a crop-duster in that article was just to attract the reader’s attention.  This chemical is actually sprayed by tractors (a.k.a. Combines).

These are very expensive pieces of equipment, air-conditioned, enclosed, using GPS to steer. No wonder we had so many replies from farmers to that Facebook post, since many could sit back in their tractor and play with their iPhones or computers and post on Facebook, letting the combine drive hands-free.  Why would you pull a weed if you had this kind of set-up?

So here are some of the reasons that the farmers themselves posted on Seagate’s Facebook page for the need to use GMO seeds and spray their crops with chemicals, in this case weed-killers:

These were just some of the farmer comments, defending and being a little bit defensive about why they spray poisons on the food they sell you. Basically it comes down to making more money spraying the poisons and using GMO seeds that can resist such poisons.

We responded to one farmer this way:  “Just keep spraying everything in sight if it makes you happy …. and we know that you have plenty of excuses for putting poisons onto whatever crops you want. Makes sense to me — spray for higher yields and don’t worry about the poor fool who has no idea what you are doing to the foods they are eating.”

Below is how Seagate controls our weeds:

This is more than a little bit disturbing. If they are so proud of their GMO seeds, then they should not be fighting the individual States that want to make it mandatory to label those foods as GMO’s.  Anyway, take a break and enjoy the Grunt, swimming past some fan coral and sea grass near Belize. He is happy because Monsanto has not yet figured out how to cause his grass to be genetically modified. 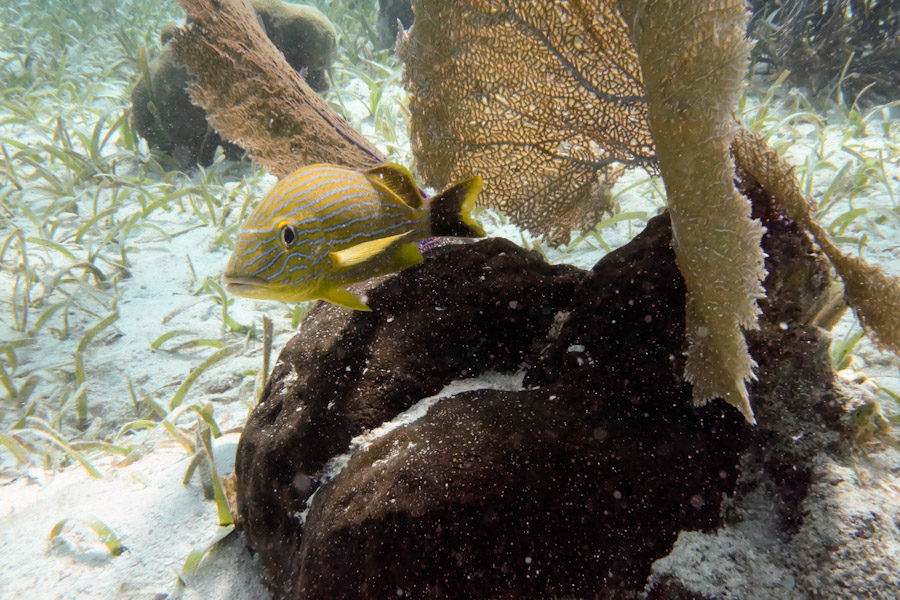