Pressed wood products (also known as particle board) have been used in home construction, some furniture and some insulation products since the 1970’s.  Unfortunately, pressed wood makes use of wood chips that have to be glued together, in many cases using urea-formaldehyde as the resin.

The emissions of toxic air occurs for many years after the construction and occupancy, though over time there is a gradual reduction.  Smaller spaces such as trailer homes and prefabs will have even higher emission levels than particle board houses.  People living in these homes have reported irritations to the eyes, sinus cavities, throats, and difficulty breathing and even asthma.  Formaldehyde fumes have since been proven to be cancer-causing in animal-testing.

It really is a shame to see homes being built locally on Coronado that are selling for $1.5+ million that are stapled particle board sheets. The people purchasing them likely have no idea what is inside their wallboard. The savings in cost by using particle board from Home Depot is really not that much compared to using plywood.   Plywood does have its own health issues due to formaldehyde, but to a lesser degree. Both are toxic.

You might recall that victims of Hurricane Katrina (August 2005) were living in FEMA-supplied trailers and mobile homes. There were 140,000 trailers purchased by FEMA costing $2.5 billion, most of which were constructed with this formaldehyde resin.  When reports of people getting sick became significant, FEMA suggested to these people that they move out. However, most stayed because they had no alternative.  Some of the excess trailers were sold off by FEMA until a Court injunction in 2007 prevented such sales. The trailers were then stored by the gov’t until 2010 at a cost of $130 million/year until the injunction expired.  FEMA then began selling off the remaining trailers in 2010, placing a tag on each stating that they were not suitable for human habitation. Of course, these tags were easily removed.  Since then there have been class action lawsuits against FEMA and the trailer manufacturers by the hurricane victims that were placed in these homes.

The use of this resin is more regulated these days, but it is still present in a lot of the particle board (and plywood) used in home construction. You may not even be aware of what is lurking inside your own walls. The good news is that over time, the resins dry and less is emitted.

Okay, this topic requires a fish picture. This one was taken off Belize of a small school of Ocean Surgeonfish. These guys are identified by their shape, color and the tiny horizontal fins which look like blue stripes near their tails. 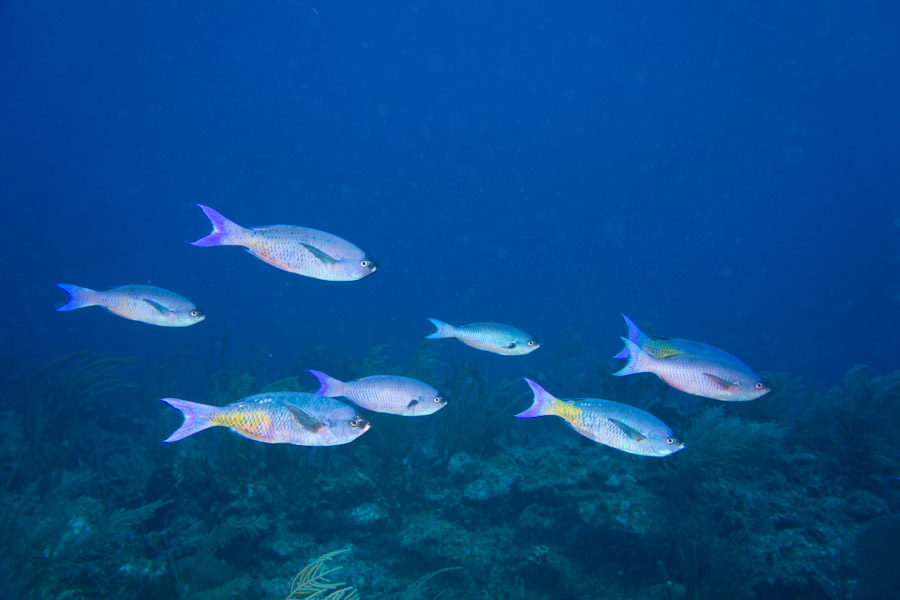