Many people have heard of xylitol as an ingredient in gum but might not be exactly sure what it really is. In small amounts, xylitol is found naturally in fruits and vegetables. But it is more commonly used as an additive in sugar-free foods and homeopathic remedies.

This article explores what xylitol is, its benefits, and why it is used in our world today.

Xylitol is a sugar alcohol that is water-soluble and stimulates the tongue’s taste receptors for sweetness. The human body produces small amounts of it through metabolism, but it is also commercially made from corn cob and birch bark. Its name comes from “xylose,” which means wood sugar because it was first produced from birch trees.

Xylitol is used as sweetener product and has been FDA-approved for food use since 1963. The World Health Organization has also confirmed that xylitol is safe for human consumption.

Some of the most common commercial uses for xylitol are sugar-free chewing gym, breath mints, toothpaste, and mouthwash. It has fewer calories than sugar – about 2.4 calories per gram compared to about four calories per gram for sugar. However, xylitol tastes just as sweet as sugar, which makes it an effective substitute.

You can get xylitol naturally from whole foods by eating strawberries, raspberries, apples, carrots, cauliflower, and mushrooms. Many commercially made, sugar-free foods contain xylitol too, including protein bars, peanut butter, and pudding.

Xylitol is a beneficial ingredient to use because it inhibits oral bacterial growth in saliva and plaque. The American Dental Association has recognized xylitol’s benefits for oral health because of this protection. Also, chewing sugar-free gum can promote saliva flow to naturally protect teeth from the bacteria that causes cavities.

Xylitol is slowly absorbed into the small intestines and has a minimal impact on blood sugar. This makes it a better choice than sugar for people with diabetes.

However, consuming too much xylitol can cause a person to feel gas, bloating, and general stomach discomfort. The results of some studies have suggested that between 20 to 70 grams of xylitol per day is well-tolerated by the body and that consuming at least five grams of xylitol, three times per day, can benefit oral health. 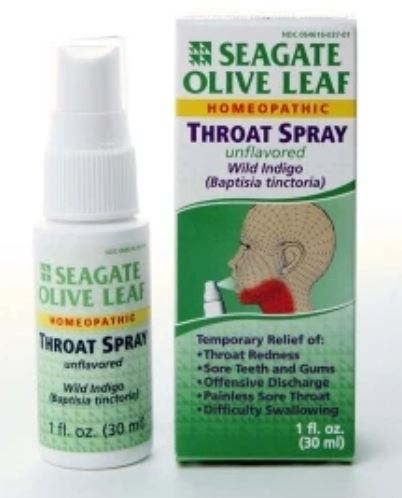 At Seagate, we use xylitol in homeopathic remedies because it is a natural antimicrobial and contributes to the pleasant flavor of oral products. It is also a great homeopathic ingredient because it does not absorb as much or as fast as regular sugar since it has an additional carbon atom to slow its absorption.

For example, Seagate Olive Leaf Throat Spray contains xylitol as a natural therapeutic sweetener derived from plants. It raises the pH of the mouth to prohibit bacteria growth, which is important for soothing mouth and throat irritations. Start with two sprays every two hours for relief and to address the problem before the germs spread and start making you feel worse.